This election is about much more than replacing DJT.  It’s about the system failures that have enabled him to get elected and that refuse to remove him from office by impeachment.  It’s time for major system changes to our economic, political and policing systems.  But first let me define some terms that I use in this message:

Our economic, political, and policing systems have all had their pre-existing failure exposed for all to not only witness, but to feel directly through loss of jobs, loss of healthcare and even feel to the point of suffering severe injury during constitutional assemblies and early death from an uncontrolled pandemic.

As our political system drifts further and further from democracy and closer and closer to totalitarianism.  Our authoritarian leaders, taking us down this path are thumbing their noses at our Constitution, our separation of powers, our checks & balances, our Postal Service and our established laws.

The favorite tool for authoritarian control is militarized police and now unidentifiable federal stormtroopers.  The political priority, which is now driven by our authoritarian economic system, is property rights over human rights.  Disorderly citizens, rebelling against their increasing subjugation by economic inequality are justifiably disrupting the use of property where profits would be produced and stolen.  On the other hand, the authoritarian peace keepers seem to say: if these citizens would just accept their place and get back to producing profit to enrich the profit looters, life would be as it should be: more wealth for the excessively wealthy and more poverty for the rest of us.

The move toward more authoritarianism starts with a centuries old authoritarian economic system that elevates profit takers over profit makers.  This abusive system, that can’t respond to national disasters, has existed for hundreds of years and has inflicted society with endless abusive economic cycles.   These abusive cycles need to be recognized and dealt with.

Every few years this authoritarian driven economy crashes.  That’s just in its nature as history shows.  For just this young 21st century, it’s already crashed three times (2000 tech bubble, 2008 Great Recession, 2020 pandemic).  Why do we put up with these frequent failures that benefit those who control the economic system while it harms everyone else?   Why do we accept increasing economic inequality?  When will we scream, “Enough!”?

A longer cycle, which includes about 15 of the short-term economic crashes above, eventually pushes the abused profit makers to finally say, Enough!  They finally rise to reject the massive economic inequality from these far too frequent economic crashes.  The shorter crash cycles have impoverished more and more of the profit makers while enriching only a few profit takers, see charts below. These longer cycles range from 70 to 100 years.  The Great Depression and subsequent revolt started 91 years ago.   A new revolt is underway today.

One of the causal factors of this longer cycle is the political control gained by the profit takers as their wealth rebounds from reduced restraints.  Their growing excessive wealth allows them to buy the political system and get laws changed that remove more restraints which have minimized their wealth and power.   Eventually, there is a revolt by the abused profit makers, a corresponding change in political leadership, and reinstatement of restraints on the profit takers/looters.  This longer had-enough cycle last rose up in the early 20th century and the same systems that are failing now had failed then.  In those times, the industrial oligarchs owned the government and abused the citizens through economic measures and policing to keep profit makers enslaved.

What BS are we told to distract us from the failures of these abusive systems?  Why are there only sequestered discussions about these system failures and possible remedies?  Who is being protected by maintaining the abusive cycles?

We need an end to both of these economic cycles: the cycling of market crashes and the longer cycling between maximizing equality with restraints on the profit looters. and maximizing inequality with the removal of restraints.  We need open-minded system change that considers different approaches from what has failed multiple times in American history as far back as 1800 and more recently in the early 1900s and again NOW.

Maximizing equality in America starts with massive citizen voting to take back and redirect our national and state governments.  Then our new government will need to pass new laws that will reinstate eliminated restraints on the profit-takers and that will protect and empower a more democratic society.

Since our authoritarian economic system is the root cause of the cycles that promote maximizing inequality and taking control of our government, laws are necessary to make our economic system more democratic.  Democracy at work must be promoted through both unions and co-ops   In other words, profit makers must become equal or sole owners in businesses, especially those businesses who currently abuse citizens the most.  This requires repealing The Taft-Hartley Act of 1947, which allows right-to-work for slave wages and new laws that put union leaders on board of directors and enables a major long-term shift to profit maker owned/managed co-ops.  The more profit makers are involved in business operational decisions, the less wealth and power are available to profit takers.

were reduced to just the rate of inflation in the 70s. 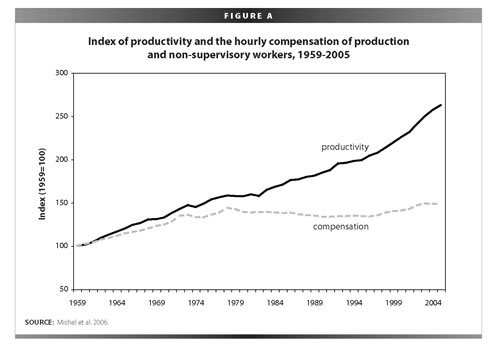 Those stolen wages  from millions of profit makers

were transferred to a few profit takers:

Giving profit makers power over their jobs will disempower the profit takers.  Profit makers will either share power as members of the board of directors through their unions or through democratic profit-maker-controlled co-ops to directly determine company goals, objectives and operations.

We also need to reverse pro-corporate SCOTUS decisions that have applied human rights to corporations and created moneyed speech.

Our policing systems must be made directly accountable to democratically selected group of community leaders who are served by the police.  This Community Oversight Team must also have oversight and veto power over their policing budget.  Community leaders must set the goals and objectives for their local policing systems including putting human rights over property rights of the extremely wealthy.

Please help redirect our future by regaining our power to rule ourselves and to advance our power to maximize equality.   I must vote and you must vote and VOTE EARLY.  VOTE in 2020 and take back our government.   Then pressure our government to pass laws that reduce authoritarian control by protecting and empowering our democratic Republic and we the people.

VOTE!  Then commit to VOTE in every future election to maintain our Democracy.

“Democracy is NOT a spectator sport.” — Thom Hartmann